The Irrawaddy dolphin is found in marine, brackish, and freshwater environments throughout southeast Asia. The name is derived from the first specimens that were described from the Ayeyarwady river in Myanmar. Although the species as a whole is considered endangered in every habitat throughout its range, the freshwater populations are considered to be at greatest risk.  It is the three riverine populations that are focused on here. 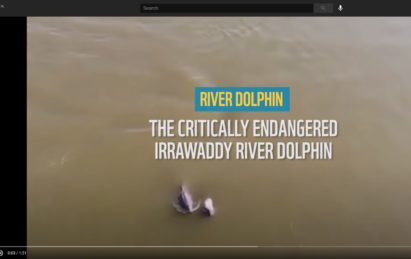 Small isolated freshwater populations of Irrawaddy dolphins are found in the Ayeyarwady (Myanmar), Mahakam (Indonesia) and the Mekong (Cambodia) rivers. In the Mahakam, the species is found in the area from about 180km above the river mouth to 600km upstream, ranging into some tributaries and lakes1. In the Mekong, dolphins inhabit a 190km long stretch from Kratie (about 500km upstream of the river mouth in Vietnam) to slightly upstream of the Laos/Cambodia border at Khone Falls (or Lee Pee). In Myanmar, the dolphins are also restricted to an inland segment of the Ayeyarwady River distant from the rivermouth itself. Where habitat use has been studied, dolphins are associated with deep (seasonal) pools at confluences and above and below rapids 1, 2. 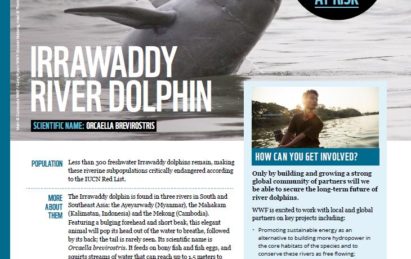 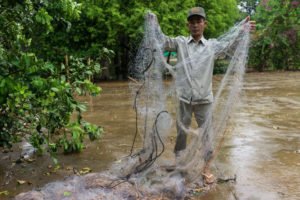 Entanglement in gillnets poses the most serious threat to all three riverine populations, and illegal fishing methods such as electrofishing are also documented in these rivers11, as is contamination due to gold mining, particularly in the Ayeyarwady River. In the Mahakam River, gillnets were determined to be responsible for 66% of deaths with a known cause, while boat collisions were thought to be responsible for 9% of mortalities. Calf mortality is high in the Mekong population, although the cause has not been identified. Long-term monitoring of the population shows that 73% of the individuals in the Mekong population are more than 20 years old, attributed to the high calf mortality7.

Habitat degradation and population fragmentation due to dam development upstream in Laos has reduced water flow in the Mekong and restricted dolphins to nine pools, with populations there ranging from 2,212 to only three individuals. Further threats to the species are caused by land use changes for palm oil plantations.  For example, the plantations have caused increased sediment load in the Mahakam, restricting the Mahakam dolphin population to the middle section of the river.  The plantations have also reduced available fish spawning areas, and caused pollution from pesticides, herbicides and fertilisers13. Mercury poisoning from gold mining and hydraulic blasting and dredging in Myanmar also pose a serious threat to the  Ayeyarwady population14.

Irrawaddy dolphins have a charismatic appeal. Their moveable lips give them expressive faces, and flexible necks allow them to move their heads in all directions. They are grey all over but lighter on the belly. Their flippers are long and paddle-shaped, with curved leading edges and rounded tips. Their tails are also large in comparison to their body length. Irrawaddy dolphins can weigh 90-200 kg and can reach lengths 180-275 cm15. Like the other river dolphins, they rely on echolocation for communication, navigation and hunting, with  Irrawaddy dolphins having a rich vocal repertoire23.  In riverine portions of the Sundarbans they produced broadband echolocation clicks with a mean source level of 195 dB (max 203 dB) re 1 µPa16. Foraging behaviour was characterised by the high movement of the animals in various directions with no obvious pattern and frequent deep dives17.

Female Irrawaddy dolphins are thought to become sexually mature at 7–9 years and to mate and give birth throughout the year. The gestation period lasts for about 14 months. Females usually give birth to a single calf every 2–3 years, with reports that in the Mahakam this may be longer. The estimated lifespan of Irrawaddy dolphins is estimated to be around 30 years18.

Irrawaddy dolphins eat any type of fish that are available, including prey on the bottom of riverbeds. However, they are partial to bony fish and fish eggs. The species can spit water up to 1.5 metres away in order to herd fish while hunting. They rely on a diet based primarily on fish and secondarily on crustaceans19. 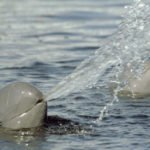 Irrawaddy dolphins are slow swimmers in comparison to other dolphin species ,and generally avoid boats. These dolphins typically occur in small groups of about seven individuals but can form larger groups of up to 30 individuals. They are relatively social, producing a wide range of vocalisations to communicate. Although shy around boats, they can display interesting social behaviours, including tail slaps, fin waves, breaching, and sideways swimming. They are also known to shoot jets of water out of their mouths, a behaviour unique to Irrawaddy dolphins. The ‘water-spitting’ is thought to have feeding and sexual courtship purposes15.

In Myanmar, the Irrawaddy dolphins help fishermen cast their nets. Fishermen let the dolphins know they are ready to fish by tapping the side of their boats. One or two dolphins then swim in smaller and smaller semicircles, herding the fish towards the fishermen. They then signal to the fishermen when to throw the net as the fish approach the boat. The dolphins often dive deeply just after the net is thrown and create turbulence under the surface around the outside of the net. The dolphins eat the fish whose movements are confused by the sinking net and those that are momentarily trapped around the edges of the lead line or stuck in the mud at the bottom just after the net is pulled up. This phenomenon is called “cooperative fishing” and it takes years of skill and trust building between humans and dolphins20, 21. 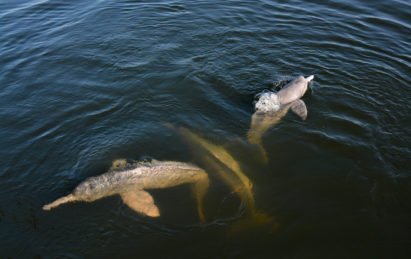 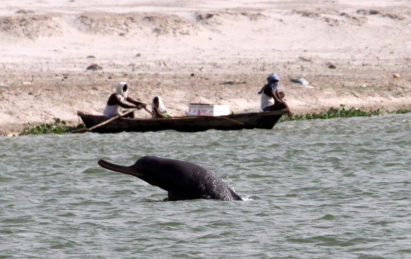 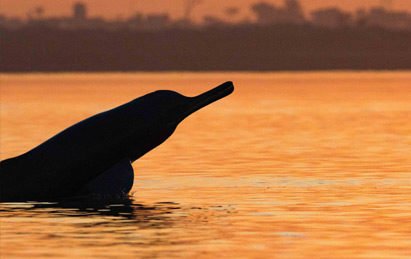