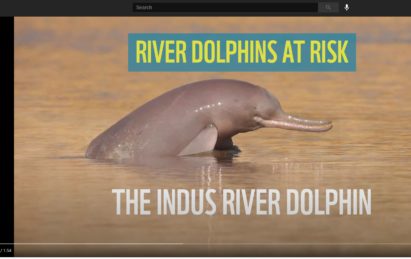 The South Asian river dolphin consisted of two sub-species, the Ganges river dolphin and the Indus river dolphin. The taxonomy of the group is in the process of being revised so that they are recognised as separate species in the course of 20213.

The most recent estimate of abundance for the Indus river dolphin, based on surveys conducted in 2017, was close to 2000 animals7. The largest dolphin population, which also occurs at very high density, is found between the Guddu and Sukkur barrages in Sindh province, and smaller populations are found in Punjab and KPK. Regular dolphin counts conducted since the 1970s show a clear increasing trend in dolphin abundance over the last 50 years7, 8.  The increase coincides with dolphin hunting being banned and is assumed to be the reason for population recovery now that hunting has stopped, in combination with other effective conservation actions. 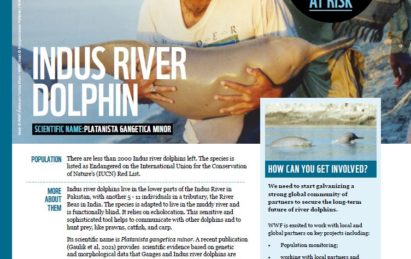 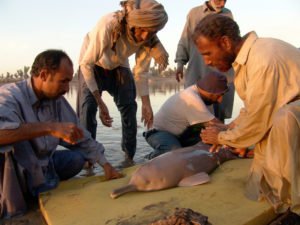 The major threats to the Indus river dolphin include water-related infrastructure such as dams, barrages and diversions, which cause flow regulation and habitat fragmentation, as well as mortality from entanglement in fishing nets, and pollution from domestic, industrial and agricultural sources7, 9. Dams and barrages fragment the dolphins habitat, reducing population connectivity and isolating animals in river sections.  They also affect river habitats by reducing water availability and habitat quality, and blocking passage for migratory fish10. Indus river dolphins, as with most other cetaceans, frequently become entangled in fishing nets and then drown. They also become trapped in irrigation canals and die unless they are rescued7, 11. As long-lived top predators, Indus river dolphins are vulnerable to negative health effects from living in waterways contaminated with heavy metals, industrial pollution and agricultural run-off. River cetaceans, including the Indus river dolphin, are considered to be indicators of river health12.

Indus river dolphins are light brownish-grey, though they sometimes exhibit lighter undersides. They have a long thin rostrum with many long teeth that are visible even when their mouths are closed. Their dorsal fin is rather small compared to other river dolphins, and is more like a triangular hump. They have large flippers and flukes, and flexible necks.

This species is functionally blind. Therefore, like other dolphin species, it relies heavily on echolocation to navigate and hunt1, 13. Externally, the eye appears to be barely larger than a pinhole, restricting light from reaching the retina, there is no lens, and the optic nerve is very narrow, leading scientists to conclude that their eyes are incapable of forming clear images, but that they may still serve as light receptors13.

Indus river dolphins reach sexual maturity when they are approximately 10 years old14. Mating occurs throughout the year but births appear to peak between March and May1. After a gestation period of 8-9 months, a single calf is born, generally around 70cm in length, and feeds on milk from the mother14. They can grow up to 2.5 metres in length and weigh 70-110 kg. Limited data is available about their lifespan, but the oldest known animal was 39 years3.

The Indus river dolphin eats a large variety of prey including river prawns, catfish and carp1. 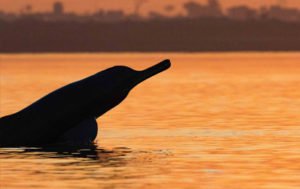 Like Ganges river dolphins, Indus river dolphins have developed a unique side swimming behaviour which is an adaptation to help them navigate through shallow waters13. Although the dolphins have occasionally been found in groups consisting of as many as 30 individuals, they are mainly solitary15.

Individuals are at the surface for only about 1 second, and they then dive for just over a minute15. Like other dolphin species, they navigate using echolocation, but reflecting the complexity of the river environment, Indus river dolphins emit sound almost constantly. Generally, these animals are shy towards humans. 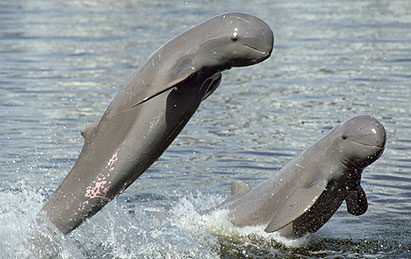 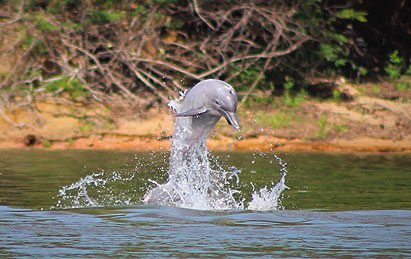 The Yangtze finless porpoise is the only freshwater porpoise in the world. It can only be found in the Yangtze River, the longest river in Asia.