Return of river dolphins to Narayani

Return of river dolphins to Narayani

It’s the best possible New Year’s present. A local nature guide in Nepal, Tek Mahato took several photos of a Ganges river dolphin in the Narayani River — the first time there’s been photographic evidence of a dolphin in the river for years.

One of the country’s four largest rivers, the Narayani crosses the border into India and used to be part of the species’ traditional range, which has dwindled considerably in recent decades.

Ganges river dolphins are now rare throughout Nepal. In 2016, the Department of Wildlife Conservation and National Parks estimated the river dolphin population in the country at 52 individuals — 43 in the Karnali River and its tributaries and 9 in the Koshi River. None were believed to still live in the Narayani River.

Indeed, it was only last year that we finalized the current distribution map of the Ganges river dolphin — just 3,500–5,000 of which now inhabit in the great Ganges-Brahmaputra-Meghna river basins. And as you can see the Narayani is coloured in purple — for population extinct — as no dolphins had been officially sighted in the river for ten years.

This wonderful news teaches us two important lessons: first of all, nature is adaptive and bounces back whenever humans allow her to do so! This hopeful message is very welcome at the start of 2022, which is an absolutely critical year for biodiversity with a new global framework for nature due to be agreed at the Convention on Biological Diversity (CBD) conference in China. The return of Ganges dolphins to the Narayani shows that life will return to the world’s rivers if we take the right steps to restore and protect them.

Freshwater species populations have collapsed by 84% since 1970 and all six river dolphin species are now facing extinction. However, we can reverse these trends if countries sign up to — and then implement — ambitious goals under the CBD to conserve and restore healthy rivers, such as keeping rivers free flowing and tackling pollution. And if more businesses adopt a water stewardship approach as well as support critical programmes, like Carlsberg is doing along the Narayani by backing WWF-Nepal’s river restoration and collective action initiative.

The second lesson is that it is high time we organized a detailed census of Nepal’s rivers to establish the true population status of its river dolphins — an activity that is in line with the government’s National River Dolphin Action Plan, which was finalized in 2021.

The most recent survey in 2016 was conducted over too short a period of time and, six years later, the situation has clearly changed. We need to know how many dolphins still swim in Nepal — and in which rivers — before the authorities, communities and conservation organisations (including my colleagues from WWF-Nepal) can develop the best way to help them survive and thrive.

Confirmation that river dolphins are back in the Narayani is also fantastic news for all of us working to safeguard river dolphins around the world. The challenges river dolphins face are huge, particularly in Asia where they live in some of the most densely populated river basins in the world. But this reappearance gives us real hope that our work — particularly with our partners under the WWF River Dolphin Rivers initiative — can make a difference.

That together we can help enhance the health of these rivers and rebuild their dolphin populations. 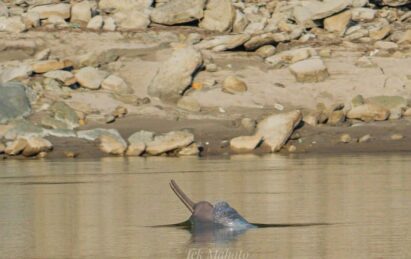