With all six river dolphin species threatened with extinction globally, an innovative project in Indonesia has proven that electronic pingers help to deter river dolphins from approaching too close to fishing nets, protecting the animals from potentially fatal entanglements – and benefiting local fishers.

Working with local communities, electronic pingers were attached to fishing nets to try and reduce the threat posed by gill nets to the last 80 Irrawaddy dolphins in Indonesia’s Mahakam river. Accidental entanglement in fishing nets has caused two thirds of dolphin deaths in the river in the past 25 years – as well as many others in the Indus, Ganges, Irrawaddy and Mekong rivers.

Released ahead of World River Dolphin Day on October 24th, the results of the pinger pilot in the Mahakam river have been incredible. Monitoring studies show that river dolphins steer clear of nets with pingers, which are acoustic devices that emit sounds to warn river dolphins away, while fishers say that dolphins no longer try to catch fish in nets with pingers.

“Pingers exceeded our expectations; they are clearly driving river dolphins away from these dangerous nets,” said Danielle Kreb, the Scientific Programme Leader at Yayasan Konservasi RASI, which is leading the study. “This is a major boost to efforts to save this tiny population as well as others in Asia and South America since entanglement in gill nets is one of the major causes of river dolphin deaths across the world.”

Pingers have been shown to reduce by-catch in gillnet fisheries for many marine dolphin, porpoise and whale species, but they had never been thoroughly tested with river dolphins.

Along with helping to safeguard the dolphins, the pingers have also enhanced the livelihood of local fishers. Studying 40 fishers over a period of six months revealed that dolphins no longer prey on fish in gillnets with pingers, which has reduced costly damage to the nets and resulted in a 40% increase in average catches. Larger fish were also caught on days when the pingers were active.

“The innovative pinger project has proven to be a win-win for river dolphins and riverine communities, who haul in more fish when the pingers are active,” said Daphne Willems, River Dolphin Rivers Initiative Lead for WWF, which supported the project.
“Reducing dolphin-fisher conflict is central to global efforts to save all six river dolphin species so we urgently need to expand the pinger project to other river dolphin rivers in Asia,” added Willems.

With less than 100 river dolphins in the Irrawaddy, it’s critical to replicate the pinger project in Myanmar’s great river too. But the pingers could also help other river dolphins to avoid fishing nets, while also preventing Indus and Ganges dolphins, which are blind, from becoming stranded in irrigation canals.

Everyone can help by crowdfunding to provide more pingers. Just $5.20 is enough for WWF to pinger-protect 1 metre of fishing net, while $87 will protect an entire fishing net with pingers to save river dolphins – and put more food on a family’s plate.

“Pingers work! It’s incredible that these small devices have the power to make such a difference to both dolphins and fishers. Now we need help getting more onto nets in river dolphin rivers. Donate now and then ping a friend about these pingers!” said Willems.

UPDATE 16 November 2021: Thanks to a successful WWF crowdfunding campaign, we now have enough funds to provide pingers for all the fishers’ nets in the stretch of Indonesia’s Mahakam river where the remaining 80 river dolphins still live.
Thanks to the generous support of people across the world, we now have a chance of achieving our goal – to ensure that no river dolphin ever dies in a fishing net in Indonesia again. 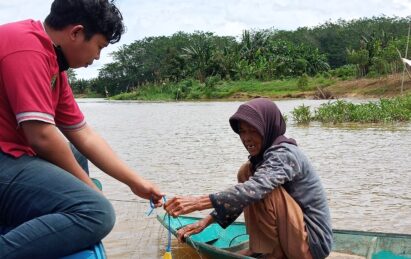