By Gill Braulik, Research Fellow in the Sea Mammal Research Unit of the University of St. Andrews, UK

Twenty years ago, I set off on a quest to understand whether the endangered dolphins in the Ganges river, and the dolphins in the Indus river were two separate species. It was a mission that took me from the tranquil waters of the Indus in Pakistan, to the bustling banks of the Ganges river in India, and ended in the silent, airless rooms in museums across the world. A journey that took in two decades, the birth of my two children, and the measurement of virtually every available river dolphin skull from across south Asia. And now it’s complete. Officially the dolphins’ are no longer sub-species of the South Asian river dolphin: they are separate species in their own right.

Those first unforgettable views of the vast, calm, silent wilderness of winding interconnected river channels, fringed by white sand glistening under a beating sun are forever marked in my mind. Freshwater turtles lined the banks, river terns swooped along the water surface, and the eerie call of lapwings pierced the silence. Although I was familiar with ocean dolphins, nothing prepared me for my first view of an Indus dolphin. Brown, blind, with a long thin rostrum (snout) and thin interlocking teeth, swimming in a river two thousand kilometers from the sea: from the very beginning I was utterly captivated by these strange, ancient and mystical creatures.

I learned that there were also river dolphins in South Asia’s other great river basin — the giant river systems of the Ganges, Brahmaputra and Meghna Rivers in Bangladesh, India and Nepal.

These ‘blind dolphins’, as they are often called, live in rivers thick-brown with sediment washed from the towering bulk of the Himalayas upstream. Light doesn’t penetrate through the brown water, so there is no need for eyes and the dolphins are effectively blind, feeling their way around the shadowy river depths using echolocation clicks to navigate and feed.

Both the Indus and the Ganges dolphins are extremely threatened, numbering only a few thousand individuals, as they live in rivers thronged with fishing nets, blocked by dams, polluted by effluents, and ploughed by ships. Life as a river dolphin is one filled with many hazards.

Treating them as one species also did not help efforts to conserve them. This view goes back to the 1800s when researchers concluded that on the whole, Indus and Ganges dolphins were pretty similar and were probably a single species.

Many decades later, in the1970s, an Italian naturalist, Dr Giorgio Pilleri spent months in the wilds of Pakistan studying Indus River dolphins. He captured five live animals and shipped them back to his laboratory at the Bern Institute for Brain Anatomy in Switzerland, where, in the following months he conducted numerous studies on their acoustics, feeding, and behaviour. His conclusion? A published paper claiming the Indus and Ganges dolphins were different species, based on unique features of the skull and other aspects of the body chemistry and anatomy.

For twenty years, this view held. But by the 1990s, scientific tools were progressing in leaps and bounds and much more scientific data was now required to prove that two mammal populations were different species, including genetic analysis. Pilleri’s work was simply not up to the new standard so — a few months after my memorable first expeditions on the Indus — his findings were dismissed as inconclusive, and the Indus and Ganges dolphins were downgraded, lumped together once again into a single, highly threatened species, the South Asian river dolphin.

The taxonomic decision was taken by international experts in meeting rooms on the other side of the world far from the rivers where the dolphins lived. The Pakistani biologists working on the Indus dolphins were not involved. Learning about it after the fact, they were understandably mystified and outraged. I could see that this controversy was not going to help with the urgent business of trying to save these dolphins from extinction, so I resolved to figure out the answer once and for all. What I needed was lots more data. So in early 2003, I went looking for skulls to measure.

First stop was the Indian museum in Kolkata which, in its heyday, was an amazing place full of treasures, but the scientific collections had fallen into disrepair. After waiting for many hours, three broken skulls were unearthed from under some ledgers in a dusty windowless room. They were too damaged to be of much use. It was a discouraging start.

From there I travelled by road for several days along the banks of the Ganges to a town called Bhagalpur where Dr Sunil Chaudhary had three carefully preserved skulls, along with notes on their sex and location of origin. A few hundred kilometres further, I found myself at Patna University with Professor Ravindra Sinha, who had collected five more dolphin skulls, including both the smallest and the largest that I would come across during the entire study. Then I crossed the border into Pakistan and proceeded south to the Sindh Dolphin Reserve in Sukkur, where Dr Uzma Khan from WWF-Pakistan and I found five more skulls.

By the end of 2003, I had measured 21 skulls, it had taken a huge effort and a lot of travel but was not even close to being enough to be able to do a strong analysis, especially because so many were chipped and broken.

It was time to turn my attention to the scientific collections in international museums. The largest and most important scientific collection, of 23 skulls, were those collected by Giorgio Pilleri and now housed at the Stuttgart Museum of Natural History in Germany. I arrived there on a sunny September day in 2008, with my 2-month-old baby Sarana in tow. There were boxes and boxes of material from Indus and Ganges dolphins, each containing a skull that was beautifully preserved and perfectly intact without a chip or a bang or a missing tooth. Inside each box was also a pair of pectoral flippers (the paddle shaped fins that jut out on either side of a dolphin’s body and are used for stability) still covered in skin and stored in salt.

This was the first time I was able to set skulls from the Ganges and those from the Indus side by side, and compare them. I soon realised that every skull from a Ganges dolphin had a peculiar protruding bone near the top behind the nasal bones, while the same bone on the Indus skulls was completely flat. Even a tiny skull from a Ganges dolphin foetus had the protruding bone. It started to dawn on me that this was a significant discovery since if this bone was present in all Ganges dolphins, then it was diagnostic, and that was one of the key requirements for designating species.

As I measured all the skulls in the collection, another thing started to emerge: all the Indus skulls had more than 30 teeth on each side of the jaw, while the Ganges dolphins had substantially less, normally between 24 and 29. More pieces of the puzzle also started to fall into place and after four days, the evidence that Indus and Ganges dolphins are actually quite different had really started to mount up.

As the years flew by, I travelled to Tokyo to measure skulls at the National Science Museum and to the prestigious London Museum of Natural History, and finally, literally the day before my son Leath was born, in June 2012, I measured the skulls at the National Museum of Scotland in Edinburgh. By then, I had measured a hard won 80 skulls and pretty much exhausted the options for finding any more. All the skulls showed the same diagnostic bone, and the same pattern in the numbers of teeth.

But it would be another eight years before I had enough proof to publish. During this time I collaborated with Dr Eric Archer, a specialist on cetacean taxonomy, genetics and statistics at the Southwest Fisheries Science Center at NOAA in the US, who worked incredibly hard to analyse the data, bringing together the information on growth, genetics, size and shape of the body and colour, as well as the information from the skulls. We bounced graphs and drafts of text back and forth across time zones, as we crafted the manuscript that we hoped would dispel any doubts, and successfully convey the strength of the evidence that Indus and Ganges dolphins were clearly different species.

The final product, 20 years in the making, 120 pages in length, was published earlier this year and it was the basis for the final decision by the Society for Marine Mammalogy and IUCN to reclassify the Indus and Ganges river dolphins as separate species. It was enormously satisfying to unveil the hidden lives of Indus and Ganges dolphins, to be able to show the world how distinct each dolphin species is, and to accomplish the mission embarked upon so long ago.

Treating them as separate species will boost efforts to conserve them. However, a new name doesn’t change the fact that not just dolphins in the Indus and Ganges rivers, but in fact all dolphins that call rivers home (including dolphins in the Yangtze, Amazon, Mekong, Irrawaddy, Mahakam and Orinoco rivers in Asia and South America) are collectively amongst the most endangered mammals worldwide. We need to further strengthen collaboration with local communities, build greater global momentum, and secure the political will to safeguard them all.

Time for a new mission — let’s hope it doesn’t take as long. 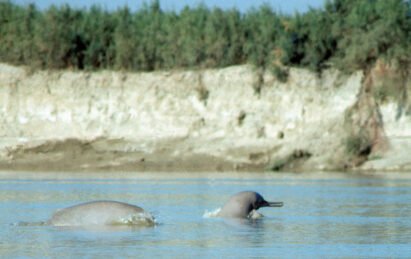