Baby boost for river dolphins in the Mekong

Baby boost for river dolphins in the Mekong

A six-day-old Irrawaddy dolphin calf was spotted among four adults at Kampi Resort on the Mekong River in Kratie province on the evening of March 5, according to WWF.

Researchers from the Cambodian Fisheries Administration and WWF-Cambodia lit up with elation after recording the second new dolphin calf so far this year, following a sighting of a week-old calf at a natural sanctuary in Stung Treng province in late February.

“Spotting these two calves represents one of the most encouraging encounters by the research team as part of their dolphin monitoring and photo-ID based surveys,” WWF-Cambodia said.

WWF-Cambodia public affairs director Tep Asnarith stressed that each dolphin is vital to the survival of the critically endangered Irrawaddy dolphin population in the Mekong.

The most recent census estimated that there were just 89 adults left in the Mekong, although this did mark an increase from the lowest recorded level of 80 in 2015.

Mekong Irrawaddy Dolphin (Orcaella brevirostris) is one of 58 endangered aquatic species and fully protected under the highest level of Fisheries Law. Population fo this species is slowly declining as adults die off and very few young survive to become breeding adults. This picture was captured on the Mekong River in the Northeast, Kratie province, Cambodia. 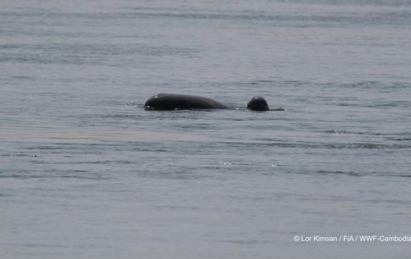